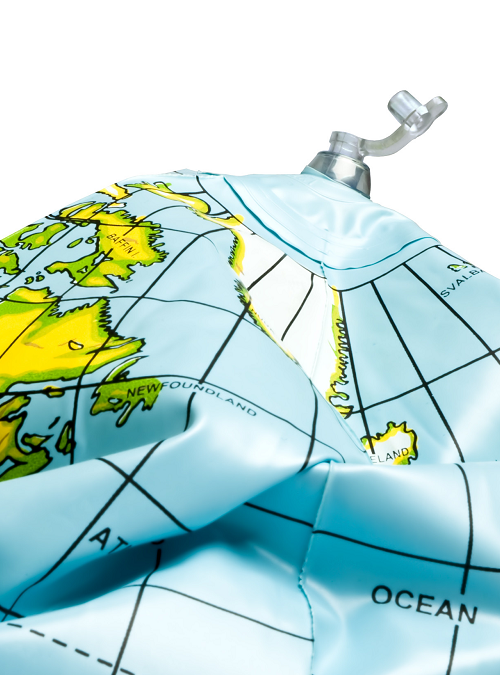 Although inflation seems to be edging up, there are still fears the UK will slip into deflation. This is important because deflation can be bad for the economy. However, one of the key reasons given for this assertion is that “if prices are falling, then people will delay purchases”. But how realistic is this assertion?

“If prices are falling, then people will delay purchases”

There are several problems with this statement. The first is the phrase “are falling”. Can we tell if prices are falling? Certainly we can tell whether they have fallen, but this is not the same thing – and it does not necessarily determine whether prices will fall, which is what matters. 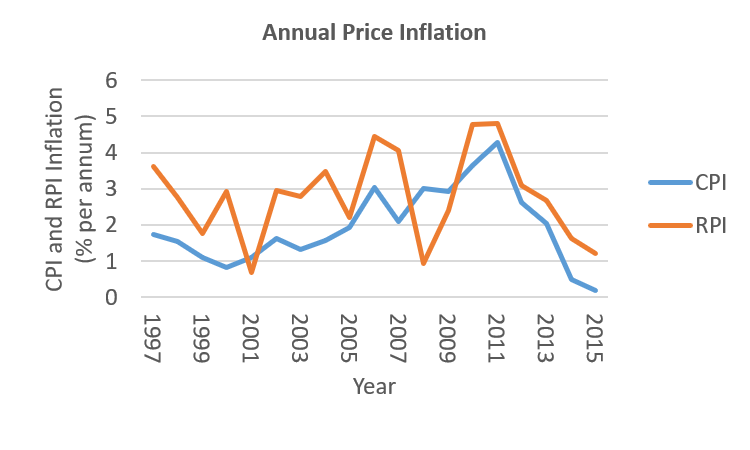 Inflation does seem to persist: if prices had risen by 10% over the last year, one might expect a future rise of 9% to be more likely than 1% over the next year.

This is indeed what we find if we analyse annual UK inflation since 1997: the year in which the Bank of England gained both independence and an inflation target. We also find that although inflation changes gradually, it appears to be mean reverting and does not seem to follow a random walk. In other words, inflation rates seem to be pulled towards some equilibrium level. This level is around 2.7% for the Retail Price Index (RPI) and 1.6% for the Consumer Prices Index (CPI) measures of inflation. Both of these are close to the Bank of England’s inflation target, which was initially 2.5% RPI inflation before being changed to 2% CPI inflation.

This suggests that even if there is any persistence in the rate at which prices increase, the pull back to the long-term target gets stronger the the further away inflation is from this target. Clearly the future might not be like the past. Also, this mean reversion is a consequence of the Bank of England’s actions taken to try and avoid not only deflation but also excessive inflation. However, it does at least seem fair to say that just because prices have fallen, this is not an indication that they will fall.

It is, though, worth noting that prices do actually fall quite regularly on a monthly basis – around twice a year, in January and July – and they have done for years. The January fall is largely due to the cost of travel reverting to its pre-Christmas level; the July fall is more frequently due to falls in the clothing sales. The chart below shows these phenomena quite clearly. 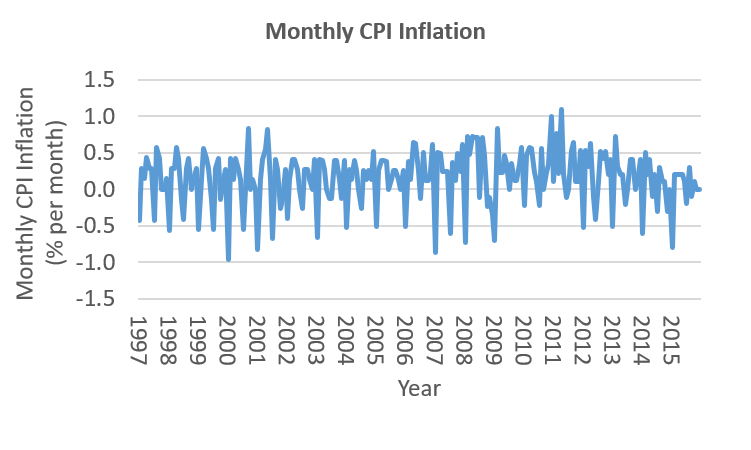 Not only do prices fall on a monthly basis in aggregate, but year-on-year falls in some sectors regularly occur, as shown below. In particular, there were annual falls in the price of clothing of between -1% and -8% in each year from 1997 to 2010. In fact, the average annual fall in the price of clothing over this period was 5%. Clearly, though, people continued to buy clothes. More recently, 2015 saw the cost of transport fall by 2.1% and the price of food fall by 2.6%. But again, travel and – in particular – eating have continued unabated (as discussed in my last blog post, here). 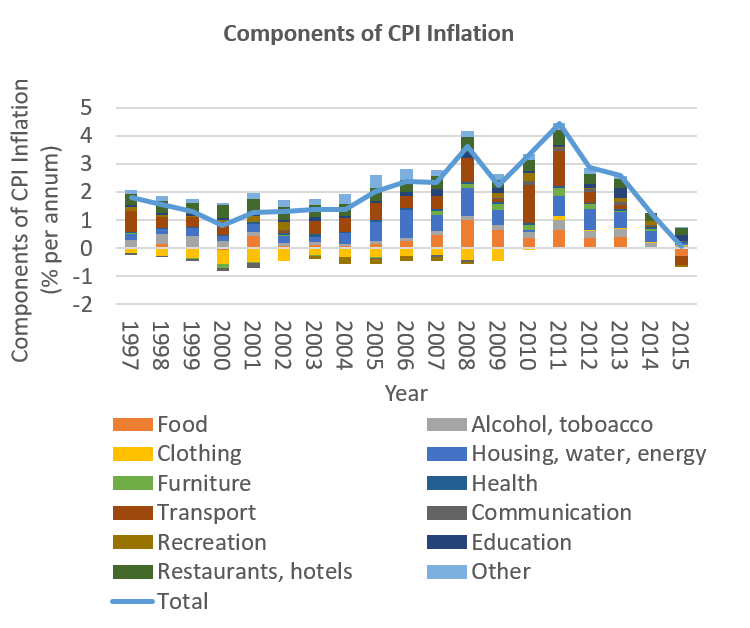 This highlights a couple of important points. The first is that there is nothing magical about a move from 0.1% inflation to 0.1% deflation. Even ignoring the fact that there are numerous ways of measuring inflation, deflation simply means that the weighted average of price changes is negative rather than positive.

The impact of deflation on fixed debt

Another key reason for avoiding deflation is said to be the impact that it has on fixed debt. In particular, if prices fall, the real – or inflation-adjusted – level of debt goes up, making it less affordable.

For a company, this argument is no more sound than the consumption deferral premise above. Since each company’s income will grow at a different rate, because none is subject to one single rate of inflation, a move from low inflation to mild deflation will not be suddenly catastrophic.

For individuals, however, the argument holds a little more water. An increase n the real value of debt could lead to people consuming less because they had to spend a greater proportion of their income paying off debt. But again, nothing magical happens at the crossover from inflation to deflation. A growth rate of 0.1% in spending is clearly better than a 0.1% fall, but not by much.

It is also important to note that the growth in wages is typically higher than the growth in prices. In fact, the annual rate of real wage growth since 1997, shown here, has been 0.4% over RPI and 1.3% over CPI. As such, if the rate of CPI deflation was 1%, this would still leave real wages rising on average. It would take deflation of well over 1.5% per annum and real wage growth of less than this to bring about real wage deflation – which would indeed cause a problem in relation to the repayment of fixed debt. 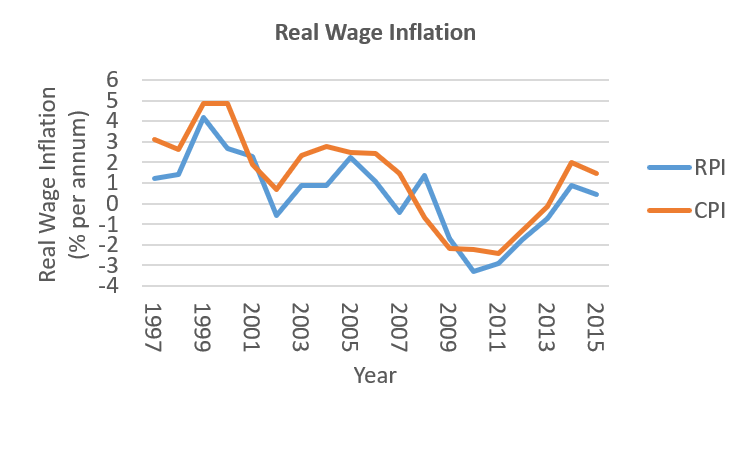 In other words, nominal wages would need to fall. However, it is widely known that nominal wages do not tend to fall. They are, to coin a phrase, “downwardly sticky”. A historical example of this stickiness can be seen in the 1925, when the UK returned to a fixed exchange rate mechanism with the US: the Gold Standard. The level at which it joined made British goods expensive, so they needed to fall. This meant that wages also needed to fall – but their “downward stickiness” meant that unemployment rose sharply instead, even before the Great Depression of the 1930s.

The real reason that deflation matters

This highlights a key risk with deflation. Because nominal wages do not tend to fall, to great a fall in prices will lead to high real wage growth. For example, if prices fall by 3% and wages do not change, then this is equivalent to real wages rising by 3%. Companies would struggle with such a high real-terms increase in costs, an growth would slow.

So severe deflation can be damaging, but not because people think they can buy stuff cheaper later on. Nor is there anything special about moving from a small rise to a small fall in prices. But if the fall in prices is great enough, then the impact on real wage growth and company profits can have serious consequences.

← 3 reasons why we're living longer than ever - and 3 more why immortality is (probably) out of reach The lifetime ISA - what's it worth? →